How to Use Electronic Calls for Turkeys

A Digital Conversation Could Restock The Larder

Turkey calling professionals might scoff at the idea of using electronic calls for turkeys, but for the rest of us, these electronic devices might be just the ticket.

Flashing back two decades, a turkey tag was a scarce commodity in my area. In fact, a decade prior to that, most of us had never seen a wild turkey, let alone hunted one. Permits were distributed by a lottery system and, even after finally drawing one during 2002, I was ill-equipped to fill the precious tag. After flubbing around for a week, a good friend offered up his services as a guide for a hunt with his teenage son, Mike, who also scored a permit.

On a chilly spring morning before dawn, dressed in camo from head to foot, Mike and I plopped down at the upper edge of a pasture with our backs to large trees. Bob was to our rear, equipped with a collection of calls. He also had expertise, garnered through several out-of-state turkey hunts.

By sunrise Bob had managed to coax a crew of vocal birds off a distant hardwood ridge and up into the pasture toward us. Only “bearded” turkeys were legal with a limit of one per hunter. Miraculously, the group of five Jakes (younger males) headed our way all had stubby beards. When, at long last, they nervously reached the two decoys, we followed Bob’s cue and fired.

Almost simultaneously, two Jakes were flopping upside down as the rest scattered in great confusion. Mike and I were equally stunned. We were also done for that year.

Traditional turkey hunting involves the use of calls and decoys, timed for the springtime breeding season. One dominant Tom (adult male) can breed numerous hens, so most states schedule their hunts to begin at the tail end of this activity.

An amorous male can be susceptible to calls from a stray “excited hen” and a decoy or two can help seal the deal. Legal birds are typically limited to those with beards; the trademark of a male (and a rarity for hens).

Most experienced hunters seek trophy “longbeards” with pronounced fighting spurs. Also known as “limb-hangers”, some of these cagy Toms may top 25 pounds. The unique beards that sprout from the top of their breasts can be long enough to drag on the ground. Calling could provoke adrenaline-charged gobbles, although some sneaky old Toms will appear without a sound.

Jakes often behave more like lovestruck teenagers, traveling in small gangs while on the prowl for girls. Their “beards” are closer to stubs and their spurs are often just nubs. Most also weigh 15 pounds or less.

They’ll often respond to a call with lots of noisy gobbling while providing plenty of entertainment. They’re the perfect quarry for beginners and they also make better table fare.

The above turkeys from 2002 were “just Jakes,” but for me the whole experience was exciting and educational. I didn’t draw a tag the following year, however I did gain some experience while calling for others – if we’d care to consider it “calling.” Surprisingly, we even killed a couple turkeys – probably because they were as uneducated as me.

But 2004 began differently. Beyond another spring tag, a new-fangled electronic game call was on hand. Built by FOXPRO, it could be operated by remote control to play any one of 32 programmable sounds. The main market for such devices was and still is predator hunting.

I ordered my FX-3 through Allpredatorcalls.com, picking a customized list of calls from FOXPRO’s much larger sound menu. Most I chose were geared toward coyotes and crows along with a few deer sounds. Almost as an afterthought, I threw in some turkey vocalizations – which turned out to be a lucky decision.

When dawn broke on opening morning of ’04, I was already tucked inside the brushy edge of a field. A pair of decoys was set twenty yards to my front, accompanied by the e-call. In classic turkey form, as the spring morning came to life, a series of distant gobbles resonated from a stand of tall white pines a couple hundred yards away. Activating the call with the remote, I answered with a few excited hen yelps.

I almost jumped through my skin when a thunderous series of gobbles exploded at a much closer distance. After “talking turkey” for several minutes, a gorgeous trophy Tom strutted into view while cautiously eyeballing the decoys. Clueless about my presence, his broadside path presented a perfect 20-yard shot that piled him up beside the decoys. For me it was a valuable learning experience; namely, turkeys will zero in the call!

Actually, my trusty FX-3 can be operated without its remote, although I seldom use that method. The call’s volume-dial turns it on. Once powered up, an LED will show a small dash meaning no call has been selected. This useful feature facilitates a quiet setup.

Both the call and its remote have push-pads for selection of a sound via numerical displays. A list of sounds is affixed to each unit, which makes this process easy. The remote has an extra set of pads to regulate the call’s volume, and a separate “mute” button.

To establish a setup, I unfold the call’s small antenna and dial up the volume by at least 50%. Then, using the remote, I toggle through the numbers to “send” the desired sound (on mine, #22 is “excited hen-yelps”). The call’s LED will synchronize with the remote but will still remain silent. Next, I slowly increase the volume with the remote. As soon as the sound is audible, I hit the “mute” button.

At that point it’s ready to set it out. This procedure ensures a trouble-free setup with only minimal exposure time. With a hide is already established, the last step is to jump back in for any final preparations.

Nowadays, in my area, turkey are everywhere. The lottery is long gone, replaced by two legal spring Toms and five fall birds of either sex. One could debate the ethics of e-calls, but at this point they’ve assumed official nuisance status in some spots. Nevertheless, once hunted, turkeys can smarten up fast.

Thus, I still take care to factor in likely approach routes when establishing an e-call setup. Odds of being busted greatly decrease if a head-on approach can be avoided. Whenever possible, I’ll also elevate the call for better output using a stump or branch, located to avoid collateral damage.

Regarding legal firearms for turkeys, like many states, mine is shotgun-only. The strategy involves head-shots. Some of today’s turkey loads offer phenomenal performance, but a forty yard shot is still a poke. Thus, I try to locate the e-call and decoys inside 25 yards – again, with it already switched on and muted. Once ready, I can un-mute the call with the remote and toggle up its volume as necessary. Use of a lanyard ensures two free hands.

The sounds play as loops, so a nonstop sequence won’t seem natural. Better to call sparingly than go overboard. I’ll often use “cuts” or “purrs” to mix things up, softening the latter as turkeys draw near. The mute button also gets lots of use.

Occasionally, I’ll tag-team with another e-call equipped hunter. Two calls resonating through the woods can generate true chaos. As a group of gobbling turkeys intermingle with the calls and decoys, the ensuing confusion can offer multiple opportunities. However, each call needs to be on a separate frequency. Ours have two-channel switches which are tested before the hunt.

Many of today’s remotes display the actual title of a sound within an illuminated window. Mine doesn’t, so I’ve learned to memorize the numerical selections for use in low light. Range of the remote can vary depending on obstructions, but my system has never imposed real-world limits. Run-time is also great when starting with a fully charged call. Early on, I switched to FOXPRO’s rechargeable kit which uses four AA batteries.

They’ll run the call for hours, even in cold conditions involving lots of loud calling for crows or predators. Once home, I remove the e-call’s battery cover before plugging in the charger. The process can take several hours, and this precaution helps prevents overheating.

Another concern is moisture. I won’t use mine in downpours, but I can shield it against light drizzle by slipping it in a plastic bread bag with its antennae poking through. Although purpose-built carriers are sold, my system is toted in a fanny pack with the strap looped over my neck and a shoulder. The remote is powered by a 9-volt battery. I always bring a spare but, so far, I’ve never needed one afield.

Like other technologies, E-calls have come a long way. Features now include greater capacity, more volume, and external connections for motion-decoys or extra speakers. Some e-calls can even play two simultaneous selections or interact with the sound of a shot. Sound customization is another possibility. Even my older FX-3 has a USB port for access to FOXPRO’s extensive on-line sound library.

The closest current match appears to be FOXPRO’s Hammerjack 2. It comes with two speakers (front and rear), 100 sounds, and a rechargeable AA battery system (requiring 8). By connecting to FOXPRO’s sound library you can boost the call to 400 sounds, picking and choosing as you please. 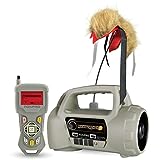 But less expensive models are available, along with costlier high-performance models. And, of course, other manufacturers offer good e-calls.

Dual sounds offer interesting possibilities, but two separated calls can still be downright deadly – especially on crows! With a couple dozen decoys spread around an owl on a pole the result can be truly awesome shotgun action. Using a single call, we’ve taken a number of other species including deer (using e-call bleats) and, of course, predators. For me though, most e-call use involves crows and turkeys.

As mentioned previously, for turkeys, calling is a spring thing. I have managed to call in the occasional bird during our fall season by breaking up a flock and playing “lost turkey”. But, for the most part, autumn is spot & stalk hunting.

Which leads to a caution: Stalking turkeys is frowned upon during spring seasons due genuine safety concerns. After all, everyone hunting turkeys is trying to imitate one! Special precautions are essential.

A hunter safety course geared toward turkeys is highly recommended for the welfare of everyone in the woods! Meanwhile, outdoor TV shows or on-line turkey hunting videos can be a source of useful information.

Regarding turkeys, initially I considered my e-call a stopgap measure, intended to cover a learning curve slowed by work and family obligations. I’ve since acquired classic calls and other paraphernalia, but opening morning of our spring 2021 turkey season found me set up – still using an electronic call.

The woods were unusually quiet at first, but a distant series of gobbles finally turned the tide. Eventually, not one but two cautious Toms crept up to my pair of decoys – in front of a raised shotgun. One carefully aligned shot tipped both over for keeps.

The evening meal? Turkey, of course!

Personally, I consider an electronic call for turkey hunting to be essential equipment, much like a rangefinder or binoculars. Between the various sound options and incidental attractions, a surprising number of species can respond to a call. But, depending on where you live, some may be off-limits for e-calls. Waterfowl are restricted federally (except in some special snow goose situations).

In other words, check before investing in an electronic call. Then stock up on some ammo and get out there to hunt some turkey!

← Prev: Shotgun Scopes for Deer Hunting – Worth It? Next: Olight Seeker 3 Pro: Best Utility Flashlight Ever? →