Best Folding Knife for Self Defense

Before explaining what makes a good folding self defense knife, we would like to point out that a knife, no matter what kind of knife it is, should not be your primary choice as a self defense weapon. This is particularly true for anyone who has never had any specialist training in how to use a knife for self defense and this belief is often backed up by skilled and expertly trained knife users who say that a knife should only ever be used for self defense as a last resort.

Knives are extremely messy. They require the user to be in very close proximity to the aggressor, which is bad news for the aggressor if the user is proficient in the use of a knife.

That is not a great situation to be in as it is only going to end one way for you, very badly!

However, regardless of the dangers, sometimes a knife will be the only option you have to defend yourself with. 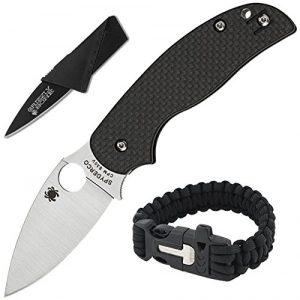 A folding knife, although not the best type of knife for close quarter combat situations, may be the best self defense option you have if concealment is a priority, but picking one out yourself is no easy task as there are so many from which to choose.

It’s practically impossible for us to name one folding knife that could be singled out as being the best for use as a self defense weapon as every knife has certain qualities that other knives will not have; and then we have to consider personal preference also.

There are many respected knife manufacturers, between them offering hundreds of excellent knives and that is why it is so difficult to pick out one knife. What we consider to be the perfect self-defense knife may be totally unsuitable for some of our readers.

The other factor that you should be considering is whether a folding knife is actually your best option.

There are many excellent folding knives currently available all designed specifically with the purpose of self defense, but as good as they all are they all have one major drawback. They all have an opening mechanism of some sort which could and does fail from time to time.

In short, if you could choose any knife for the purpose of self defense a folding knife is not what you should choose!

A fixed blade knife will always beat a folding knife for self defense purposes. Fixed blade knives are always going to be stronger than folders but they are obviously much more difficult to conceal.

However, if you want a knife that can be carried in your pocket or concealed in your EDC bag then a folding knife specifically designed for the purpose of self defense is what you need!

When it comes to selection, not all folding knives are created equal. There are certain boxes that all knives needs to tick before they can be added to a list of possibilities.

Important factors to consider when choosing a folding knife

Some of the Best Folding Knives for Self Defense