When faced with unpredictable and extreme weather conditions and highly destructive natural disasters, you will need to have reliable technology from a trusted brand to keep you informed so you can stay ahead of any potentially dangerous weather fronts.

The self-powering Midland ER310 Emergency Weather Radio is just the piece of gear to deliver on that task.

Midland are market leaders in two way communication and emergency weather radios and the Midland ER310 is their latest offering for the latter.

An upgrade from the excellent Midland ER210 emergency weather radio, the ER310 features everything the previous model offered but with the addition of increased battery capacity, an ultrasonic dog whistle alert and a very slight redesign.

Unfortunately, hand crank power generation is where the ER310 really lets itself down, for every two minutes of hand cranking at 120 rpm the radio will only operate for around 3.5 minutes (albeit on full power). This power return on cranking is well below the best radios on our list and a pretty poor return truth be known.

When charging with a wall adapter the radio takes a respectable five and a half hours to charge and when fully charged the radio will operate for approximately 9.5 hours on full volume which is only bettered by the two Eton radios at the top of this list.

The ER310 can also be charged through a USB connection with your PC or laptop and it also has a solar panel which when used is fine for powering the radio on sunny days thus saving battery power, just don’t expect it to charge your battery that well.

The manual that comes with the radio states that for every hour you charge the radio with the solar panel in direct sunshine you will be able to get 45 minutes of radio play.

I cannot say whether or not that is the case as it is something we never had enough sun to check.

However, the hand crank will do a much better job when you have to revert to self powering methods of charging anyway…rain or shine!

The ER310 receives FM frequencies particularly well and receives AM signals averagely. Audio is very clear and the speaker is one of the loudest and clearest of the radios on this list. All in all, a solid performer but is certainly nowhere near the top of the pile!

Obviously, it goes without saying that the radio comes equipped with NOAA emergency weather broadcast functionality, but it doesn’t have SAME function; that it seems, is reserved only for the Eton FRX5BT on our roll call! 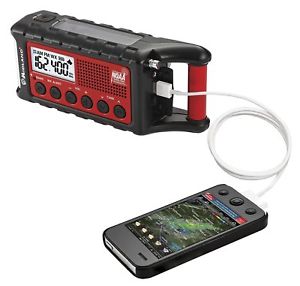 Where would we be if we couldn’t compare all the survival extras that our emergency radios offer?

The Midland ER310 has a few of the extras we have come to expect as standard from today’s emergency radios; the LED flashlight and the ability to charge mobile devices being just two of those.

One difference with the ER310’s flashlight is that it can be set to omit an SOS strobe in Morse code.

As I mentioned earlier the ER310 is also fitted with an ultrasonic dog whistle, inaudible to our ears but for search parties using dogs it could be the difference between them finding you or not!

Truthfully, we expected the Midland ER310 to perform much better than it did, yes it’s well made but as far as we’re concerned, performance is everything, especially when you are in a sticky situation, which is the whole reason why we buy these radios, isn’t it?

Don’t get us wrong, the ER310 isn’t a bad emergency radio, far from it, it’s just not up there with the best in our opinion.