When you are facing an emergency situation the RunningSnail MD-090 provides pretty much everything that all the other emergency radios on this list provide and rightly deserves a place among the annual alumni of best hand crank emergency weather radios.

So let’s take a closer look as to why that is the case below! 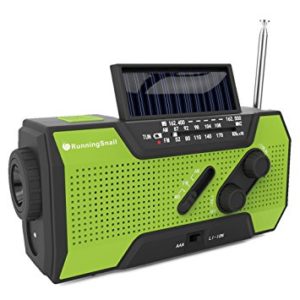 The RunningSnail MD-090 can be powered in 5 ways; mains adapter, USB adapter, car adapter, solar and hand crank are all methods of charging the 2000 mAh rechargeable battery.

The RunningSnail can also be powered using 3 disposable AAA batteries.

As with all emergency radios the fastest way to fully charge the RunningSnail’s batteries is to use a wall-charger which only takes an impressive 4 hours for this radio to achieve.

Equally impressive is the 11.5 hours minimum of battery life achieved by using the radio at its most power sapping level, which is at full volume, used infrequently and at moderate volume levels expect the radio to last much longer.

Unfortunately, the radio doesn’t come supplied with a wall or car charger, so you will have to purchase these separately. However a USB charging cable is supplied.

USB charging through a PC or laptop or by using a car adapter will take roughly the same time as when charging with a wall charger.

The solar function on the RunningSnail is not suitable for use as a sole charging method although on a bright sunny day it is more than capable of powering the radio on its own.

The hand crank mechanism is pretty sturdy and operates very well. When rotated at 120 revolutions a minute the radio will operate for around three minutes on full volume, longer when volume is set to a lower level.

It is possible to fully charge the radio using just the hand crank but it would take a mind numbing spinning of around 5 hours to eventually reach that state, this is the reason why the hand crank should only be viewed as an emergency charging method and not as a primary.

The RunningSnail MD-090 has a small light that glows red when charging turning green when the battery is fully charged. 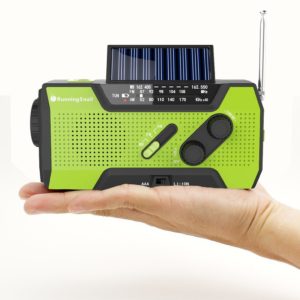 The RunningSnail MD-090 offers AM and FM radio functionality as well as NOAA severe weather service.

Although not the best performing radio with reference to reception strength and audio quality it certainly performs well above average, particularly when used in back country regions.

One of the biggest failings of the RunningSnail MD-090 is its analogue tuning, which makes it very difficult to fine tune the radio and much more time is required to do so when compared to radios offering digital tuning.

One of the issues a few buyers had with this radio is that the antenna can easily come apart so should you decide to buy an MD-090, you should be wary of any issues with the built in antenna, initially anyway.

The RunningSnail MD-090 has a; built in 1W LED adjustable zoom flashlight and an LED reading light. It is IPX3 rated meaning it is weatherproof and not waterproof, and has been tested and proven to be okay to use in wet weather, to a certain point at least. 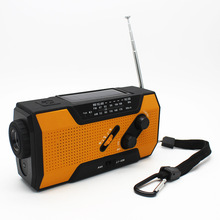 The MD-090 also features an SOS alarm with a red flashing light excellent for attracting attention when you are in trouble and in need of rescue or assistance.

The MD-090 can be used as a charging station for your mobile devices. Although it is highly unlikely you will ever fully charge your mobile devices due to the time it would take and the draw on power to do so. That’s not to say it’s impossible though.

Although the RunningSnail MD-090 appears somewhat retro, its funky green and black tough plastic and rubberized outer casing gives the radio a look and feel of modern day ruggedness.

What Do We Think?

The RunningSnail MD-090 is one of the lowest priced emergency weather radios on our list yet still punches well above its weight.

Although its performance isn’t as good as the top ranked radios, it is still a radio that we would be more than happy to put our faith in when wandering through the back country.

If you a looking for a small affordable emergency weather radio with hand crank charging capability which is also a solid and reliable performer then the RunningSnail MD-090 might well be what you’re looking for!

Only issue for use is the analogue tuning, which is a bit of a pain when compared with the ease and accuracy of digital tuners.