This bright yellow, brick shaped emergency radio is both very compact and rugged and is therefore perfectly designed for use outdoors. Measuring just 6″ in length and approximately 3″ in both depth and width and weighing a mere 10oz, it is a great size and weight for stowing in your back pack or bug out bag.

The Sangean MMR-88 is made with toughened plastic which has been made even sturdier with the addition of thick rubberized edging that will protect the radio from many of the bumps and scrapes you would expect an outdoor radio to experience, in fact, the MMR-88 is probably the most robust radio on our list!

As well as having a sturdy casing, Sangean has incorporated a degree of weather resistance into the MMR-88 which has been rewarded with a grading of IPX3 meaning the radio is resistant to water spray, which I suppose would include light rain.

Note: Please don’t mistake weather resistance as being waterproof because it isn’t. In other words, if you can keep your radio out of the rain altogether, then it is probably best to do so!

The Sangean MMR-88 is probably one of the fastest charging emergency weather radios we have looked at, in fact it takes less than three hours using a standard mains adapter to fully charge the radio from a completely discharged state.

Unfortunately you will have to buy a wall adapter yourself as the radio isn’t supplied with one. It should also be noted that the fast charge time is somewhat misleading.

The Sangean MMR-88 is powered by a 850 mAh rechargeable battery which is a considerably smaller battery pack than all the other radios on our list and it makes sense that the smaller the battery pack the quicker it can be charged, the down side is that it also means the battery life of the radio will be much shorter, which it is, considerably so, 5 hours when used at its most power sapping setting, obviously longer when it is not. 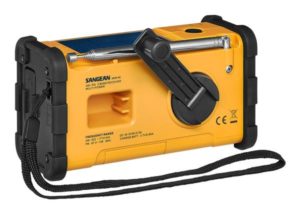 Let’s now focus for a moment on the performance of the hand crank mechanism. In this regard, we have to say that the MMR-88 performs exceptionally well. In fact, the MMR-88, is only bettered on our list by the Eton FRX5BT, and the ETON Scorpion II, for power generation achieved from hand cranking alone.

It should also be noted that even though the hand crank power generation mechanism works very well on the MMR-88 it still only produces half the power for the same amount of cranking as the FRX5BT!

Although the MMR-88 doesn’t come with a wall adapter it does however come with a USB charging cable which is just as fast a way to charge the radio.

The final way you can charge the MMR-88 is with solar using the built in solar power panel. Again, this isn’t the fastest way to charge your battery but if the sun is strong enough you could have a fully charged battery in 15 hours. (That’s a lot of sun!)

The Sangean MMR-88 performs really well, without excelling, as a standalone radio with good AM and FM reception.

Where it does excel though is in the quality of it’s audio. With its very clear audio you can listen to and understand weather warnings at a much lower volume than with most other weather radios which in turn will help prolong the life of the battery, remember, the lower the volume the less power a radio uses.

Needless to say, as with all weather radios we cover here on Alpha Survivalist, the Sangean MMR-88 offers access to all 7 NOAA weather reports.

The ability to charge your cell phone or any other mobile device from the radio seems to be a standard among weather radios and this hand crank emergency radio is no exception as it too offers that feature.

Another extra that seems to be an ever present on all the radios we have reviewed is a flashlight. The flashlight on this particular radio offers the added emergency features of a flashing/blinking strobe alert which can be changed to an SOS Morse type flashing alert when needed.

An emergency siren is built in and the radio also has a 90 minute automatic shut off to preserve battery life, but you do have the option to override this facility should you wish to.

What Do We Think of the Sangean MMR-88?

Sure it’s not threatening to dislodge the Eton radios as one of our ‘best of‘ radios any time soon but it would certainly give every other hand crank weather radio a run for it’s money, and is fully deserving of a place in our current list of top weather radios!

A durable and handsome looking radio that performs well. Well worth giving consideration to.